I don't care what you did yesterday

I have worked in different Agile teams for several years. Some of them have been Scrum teams, some Agile teams in other ways. No matter what methodology the team has used, one practice has been pretty much always there, the daily standups.

Let me show you the path I've walked. The starting point shouldn't be a big surprise for anyone.


What did you do yesterday? What are you going to do today? Is there anything blocking you? These are the questions that probably most of the Scrum teams all over the world ask every working day from every team member. I find this a very effective way to focus on every day work compared to for example weekly meetings.

However, there is one problem here. Scrum should be team work. If the most often repeated ritual focuses on individuals so heavily, something has to be missing there.


Some years ago I found a blog post (*) that described different approaches to the daily scrums. One of them was user story focused daily standup. The idea is that we shouldn't "focus on the runners but on the baton". Runners obviously refer to team members and baton to the tasks they do. In other words, if the team is supposed to develop user stories, let's see how the stories have progressed, how we plan to advance them today, and if there is something that prevents us from developing them.

The idea resonated a lot to me and I have tried it at least with three different teams, one of them being my current team. The problem is that it never felt natural for the team members in any of those teams. It was quite hard for people to follow what task we were talking about right now and what next. To make this work in practice, there had to be someone who facilitates the meeting. But if you need someone to do that for this simple 15 minutes standup, there must be again something wrong with the method.

What eventually happened in the teams was that we returned back to the basic individual-focused method. I just had to accept that because I didn't have anything better to offer. However, I still felt that there must be something better, I just didn't know what that was.


A couple of months ago I was thinking that it would help our team if we wrote our goals to our board. There were two reasons for this. First of all, when you write something down, you are making implicit explicit. It wasn't always so obvious for us what the team's goals actually were, so this forced us and especially our Product Owner to think about them. Second, when everybody sees the goals all the time, they become stronger. It's much easier to try to reach the goals when they are just in front of your eyes all the time.


When the goals had been in the board for a couple of days, I finally got it. Even though we hadn't yet even tried, I was convinced that this was the missing thing to make really good daily standups. So I asked our team that could we run the standups so that we just forget the individuals and focus on goals. The basic idea was that we go the goals through one by one and whoever has anything to say to the goal we are talking about can say whatever she wants to say. After all goals had been walked through, people could bring up all the other relevant things that hadn't been mentioned yet.

At this point it may be relevant to notice that we are typically having 4-5 goals at the same time. In the most optimum situation there would be only one goal at a time, and our team would try to get there as fast as possible. However, our work is such that for example the first goal is to help some other teams to reach their own goals. In practice this means that whenever they have new needs that we can fulfil, we do that with the highest priority. Otherwise that goal just hangs out there and we can skip it in the standup. There can be also upcoming goals typically in the position #4 or #5 to tell us what will come next. Even though there may not be programming tasks going on related to these goals, there may be e.g. planning happening and someone in the team can share with others how it is progressing. 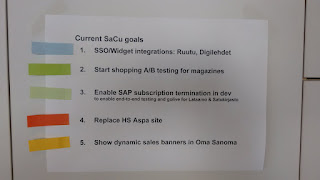 Our current goals. #1 is about helping the other teams. #2 and #4 are active in some level. #3 and #5 are new goals that were added today and will become more active when e.g. #2 gets done.

The new setup has worked really well for us. We use the most of the 15 minutes for the things that matter most for us. There is always something else but that stays on minority. I could say that typically it takes about 10 minutes to check the status of the goals and 2-5 minutes for the other things.

You could say that the things we talk about on goal-based standups are mostly the same that we would talk on individual-based standups. However, I find that there is a very important difference on the perspective. It really doesn't matter what you did yesterday or what you are going to do today. What truly matters is what we together have done for the goals and what we together are going to do them today.


Revealing problem with our focus


Some time ago the goal-based daily standups revealed a problem we had. I realised that even though we talked about only 5 minutes about the goals, our standups could easily take 20-25 minutes. This meant that most of our focus was in the work that wasn't actually our highest priority. (And besides that, we weren't very efficient when talking about it.) In other words, our goals were listed but the tasks we were working with were mostly related to something else. After realising this we had a good discussion with the team and we were able to solve the problem. Since then the situation has been much better.

In order to emphasise this we have a small sticker next to each goal (see the photo above). Each task then has the same sticker on the whiteboard. This helps us to see that the majority of the tasks either in progress or coming next are related to the goals.


Very typically agile teams benefit from having a short standup meeting every day. However, the traditional daily scrum format is very individual-focused and can easily forget the team and goal aspects. Instead of that, write your current goals down and put them visible for everyone (e.g. on whiteboard). Then on daily standups do not go through each team member but go through each goal.

(*) I was not able to find the original blog post anymore but the content of this one looks very similar to me, even though this one is dated to 2016: http://martinfowler.com/articles/itsNotJustStandingUp.html
Posted by Henri Karhatsu at 7:08 PM